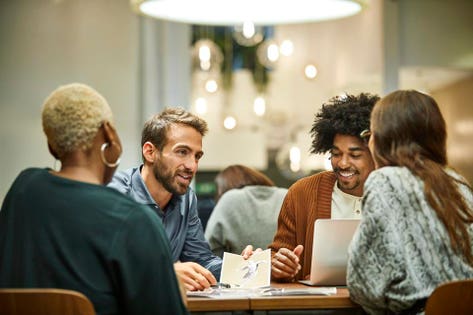 Early in my career, I worked in real estate (and still do to this day). I’d be lying if I said I was welcomed with open arms by people who wanted to see me succeed. I did meet some of those people and felt lucky to work alongside them, but I encountered several who saw me as an obstacle to their own success.

I grappled with two strong instincts. On one hand, I’d always been adamant about thoughtfulness — it was a big part of my life; I’d been drawn to kindnesses I could do for others. On the other hand, I wanted to be successful. If the powerful people in this industry were cutthroat and conniving, maybe I needed to be, too.

After years of experiencing both people-pleasing and dog-eat-dog tendencies, I found you can be both successful and thoughtful. But it takes a different approach.

Giving Is a Two-Way Street

I wasn’t the only one who had this kind of experience. I was fortunate to speak at the same event recently as Jonathan Keyser, the founder of Keyser, one of the fastest-growing commercial real estate firms in the country. In his book You Don’t Have to Be Ruthless to Win, he says, “I was doing ‘others first’ work in a ‘take all you can get’ world.” After growing up poor as a missionary kid, he wanted badly to be successful — but found that commercial real estate was commission-based and therefore cutthroat.

He vowed not to let anyone take advantage of him. He took calls from his car to avoid tapped conference rooms. He made it a point to only show the highest-commission buildings. He learned to represent both sides of real estate transactions to maximize his payout. He marginalized teammates’ contributions to get more credit and commission. Everything he gave had strings attached.

But with the dot-com bust came a humbling bankruptcy as business evaporated overnight. A couple of years later, as the industry started recovering, Keyser learned about a serving-others-first model at a conference. This approach focused on what he’d learned as a kid: There’s disappointment in not having a need met, and there’s joy from receiving from someone who met that need.

He decided to stop looking for short-term quid pro quo transactions and build truly giving relationships. Slowly but surely, his selfless approach and hard work to help others paid off. People started responding to his long-term investments in them and passed referrals his way. His team worked hard because they were constantly looking for ways to help each other. He now had both success and the ability to sleep at night.

I asked Keyser how others can make a similar shift and focus on being truly helpful. Here’s what he recommended:

“Investing in serving others isn’t an instant-gratification play,” Keyser told me. You often have to plant the seed years before you see any fruit. Don’t expect to immediately see people sending you referrals or giving you their business; that’s defaulting to a transactional point of view. Focus on the relationships themselves, as well as what you can offer others. Don’t keep track of what you do for others or expect credit. This is about them, not you.

2. Take a close look at your company culture.

“Bottom line, practicing selflessness with the people you’re in closest proximity with every day increases trust,” Keyser said. Adding a spirit of service and setting your teammates up for success goes a long way toward building goodwill. This isn’t so you have a cushion if you need to ask for forgiveness or a favor later; it’s to instill a similar “How can I help?” attitude among your teammates. One of Keyser’s friends adopted this approach and saw her middling reviews shift to outstanding — everyone on her team had grown to love her.

3. Focus on your gratitude.

To keep going when times were lean, Keyser focused on what he had: a happier conscience, others’ respect, and newfound grit. “It helped to be able to focus on how proud I was of my actions,” he said, “but I made sure to extend that gratitude to others, too.” Write thank-you letters or shoot appreciative emails to people who made your day better. Refer people who could benefit from others’ services. Talk openly with your teammates about how you’re committing to them because you want to build something lasting together.

Telling people to avoid overly preparing for meetings might sound like career suicide, and Keyser acknowledges it’s advice you probably won’t hear from others. Over-preparing, however, prevents you from hearing what the other person is saying. “You think you already know what they’re thinking, so you don’t actually hear what they’re thinking,” he said. “How helpful is that?” Stop thinking about what you want to say next, and don’t rely on internet research to tell you the whole story. Make sure to hear it for yourself — you may discover an opportunity to add value that you wouldn’t have otherwise.

People who try to avoid mistakes, Keyser said, perform far below their potential. “A culture that exudes a fear of punishment simply teaches people to manipulate the system,” he explained. “Your company loses its most confident and productive people.” Most of us, he said, have an internal defense mechanism that invalidates any criticism we receive. Get past pointing fingers so you can help your team solve problems and learn. That’s how they — and you — grow into bigger service.

As Keyser says, the “pleasing prison” is creepy for everyone. People don’t like feeling you need credit for your “selfless” acts — or, worse, that they’re indebted to you. People pleasing stems from having expectations of others, and that’s the exact opposite of thoughtfulness. Instead, shift to a relationship-building mindset. You — and everyone around you — will benefit from the seeds you plant.

How Virtual Co-Working Can Boost Remote Team Productivity
Billionaire Barry Sternlicht sees a ‘vicious cycle’ of pain if U.S. businesses can’t reopen
Facebook has a PR problem, not a long-term revenue problem
Top 5 free backlink checkers you should be using
Usage of voice has plateaued — for now